When it comes to arcade games, there are incredible classics that everyone remembers. These include Space Invaders, PacMan, and of course, Donkey Kong, What made these games great was the originality and game-play that became addictive and drove millions of people into the arcades to play. Here at Williams Amusements, one of our favourites had got to be Donkey Kong, and the entire Donkey Kong family of arcade games. But why where these so successful, and what was so special about them? This is our guide to the success of Donkey Kong. 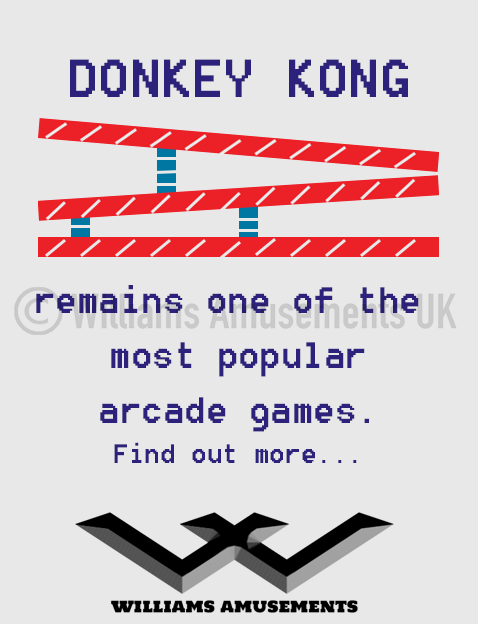 Although Donkey Kong is often recorded as being the first game to feature Mario, this isn’t really the whole truth. In fact, when the game was released in Japan, the hero was actually a carpenter called Jumpman (wonder why). In the game his girlfriend, Lady, has been kidnapped by his pet gorilla who has tuned on him. Donkey Kong is holding Lady hostage at the very top of a construction site. The player has to help Jumpman rescue Lady by leaping up the beams and dodging the barrels being launched. When this was released in America, the Nintendo US Employees renamed the characters and gave Jumpman a new job, a plumber.

Although the plot sounds a little simple by today’s standards, this was actually an incredible leap for coin operated arcade machines. In fact, prior to Donkey Kong, most games where space shooters or maze chase games based on the success of PacMan and Space Invaders. As a result, Donkey Kong was actually the first arcade game to involve any kind of narrative or character, which was obviously a winning formula.

Not only was Donkey Kong the first arcade game to involve characterization and narrative, it is also hailed as the first ever platformer. This was yet another milestone in video game history. To rescue Lady, the player had to lead Jumpman (or Mario as he is now known) up the beams while also jumping over moving projectiles. Although fairly basic, this game involved the same jump-dash-run scenario we see in all platform games today.

Donkey Kong was truly a remarkable arcade game that still holds as much weight now as it did back in 1981. For your own piece of Donkey Kong history, why not check out our Donkey Kong Junior arcade game, here at Williams amusements?