While PS4 and the Xbox One compete for our hard earned cash and attention on the TV screen, its easy to forget the early competitions of Sega, Namco, Atari, Konami and Nintendo. These big names had to scrap it out with fantastic and innovative coin operated arcade machines. Although the Golden Age of arcade machines generated more revenue than Hollywood and the Pop music industry, only a handful of the leading characters have remained. Frogger is one of these survivors. But what made Frogger so different? And why is it still popular today? Here at Williams Amusements, we are arcade game experts. As a result, we have produced this buyer’s guide to Frogger arcade game cabinets. 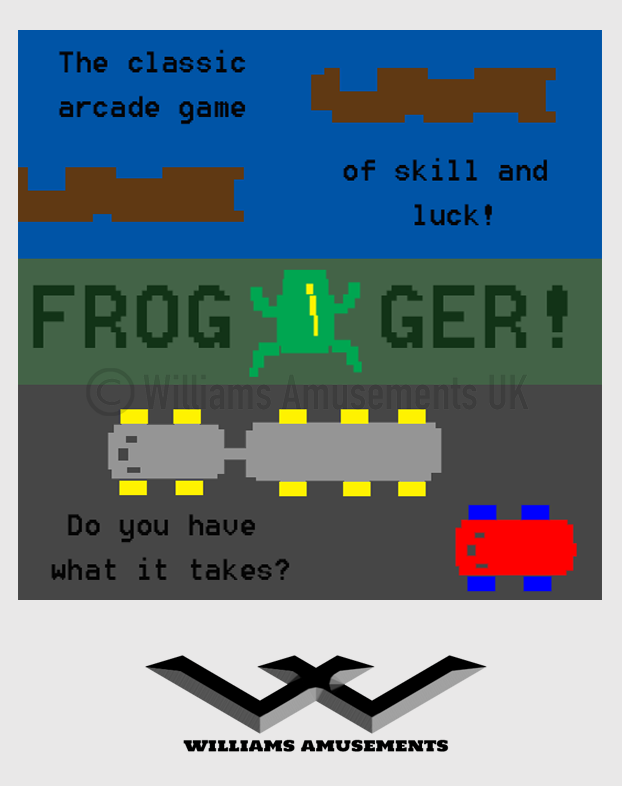 Although it seems absurd to us, we know that some of you may not be aware of what exactly Frogger is. So here is some brief history:

Frogger gameplay was different to the space shooters, adventure shooters, and fighting games that were available at the time. It was a lot more puzzle based. As a result, it captured a lot of attention.

The gameplay essentially involves helping frogs make their way home by crossing a busy road, or a river. The trucks and cars would run over the frogs, and in the river, alligators, otters, and snakes all posed a danger, as well as the water itself. As a result, the player would pay a lot of attention to the movement of the enemies and have to hop from one side to the other, without going off the screen, missing their home, or touching an enemy.

Frogger is such a classic arcade game that it made its way onto nearly every home gaming system since then including the Gameboy colour (and advance) ,Playstation (1, 2 and 3), Xbox (and Xbox 360), Nintendo DS (and 3DS), as well as mobile devices.

It also inspired a huge range of clones and other versions. In fact, even today, 36 years later, a simple search for Frogger in the Google Play store will throw back a whole list of Frogger clones that may or may not cause unwanted adverts to take over your phone (we wouldn’t advise it).

So, if you are looking for a more unusual arcade game with authentic graphics, sounds, and gameplay, Frogger could be the game for you.

The arcade game cabinet comes with the original 4 directional joystick which helps add to the fun and challenging nature of the game.

In addition, our cabinet comes with full Frogger artwork based on the original design.

The icing on the cake, our Frogger arcade game cabinets can come with up to 60 other games installed! So you can take a break and play another of the classic games.

For more information, why not check out our Frogger arcade game cabinet? Or contact us today here at Williams Amusements.