Here at Williams Amusements, arcade games are our passion. One of the classics that many people remember fondly is the Atari Gauntlet Arcade Machine. But why was this so popular? And what made it stand out?

Although World of Warcraft, the Elder Scrolls series and League of Legends may take all the credit currently, the action-dungeon-adventure on our computer screens began with Gauntlet. It was a game-changing development and a huge leap from maze games and space shooters, which were popular at the time in arcades across the UK.

Delving into fantasy, finding monsters, looting treasure and trying to get out of the dungeon became such a popular game set-up, that these games remain popular to this day. 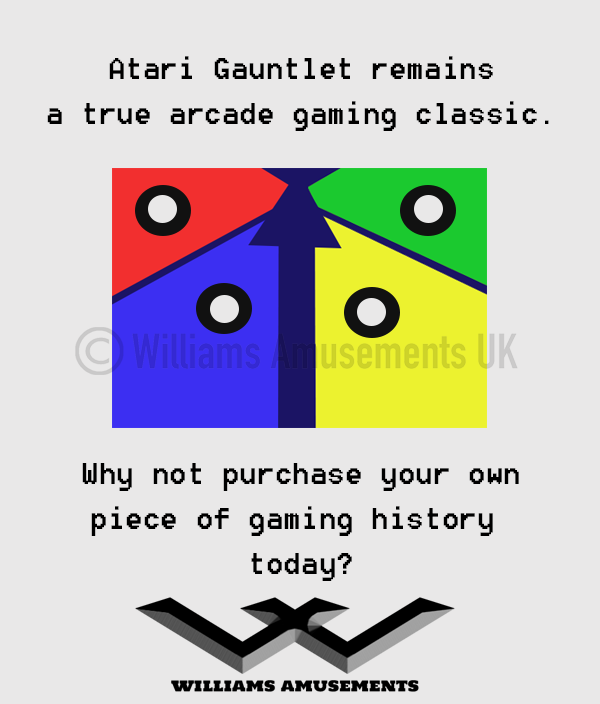 Not only was the Atari Gauntlet Arcade Machine innovative in its game design and play, it was the first arcade game to offer the opportunity for up to four players to play together. Relying on teamwork, and each member to work together, the dungeon adventure was also a social activity.

For those four players, there is a choice of four characters: Thor the Warrior, Merlin the Wizard, Thyra the Valkyrie or Questor the Elf. Each of these roles have their own strengths and weaknesses, and players needed to establish these, as well as figure out the dungeon mazes and how to defeat the monsters that lurked.

Finally, it wasnt just the foray into fantasy, or the team playing, that made the Atari Gauntlet Arcade Machine so popular. It was also the first machine to use a narrator, with the addition of a Texas Instruments TMS5220C speech chip. This meant that simple sentences, such as “I’ve not seen such bravery!” and “Valkyrie…is about to die!” could echo across arcades, impressing the players and attracting more interest.

The Atari Gauntlet Arcade Machine was the first of its type to delve into the fantasy realms, offer players the opportunity to work together, and actually speak to the players. It’s no wonder it is one of the most popular arcade games of all time. If you would like to own a piece of history, take a look at our Atari Gauntlet Arcade Machine today, here at Williams amusements.